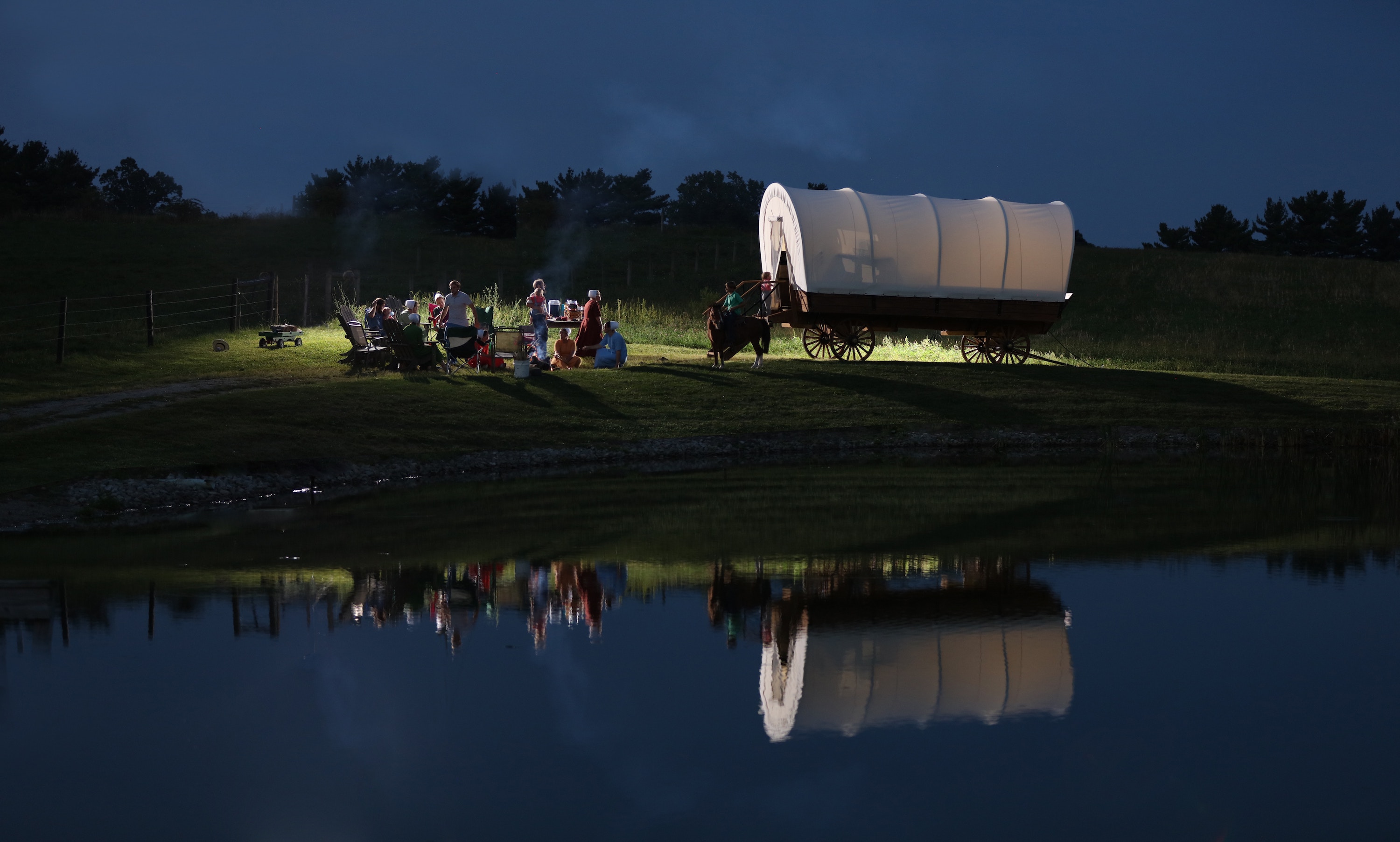 Posted at 18:30h in Games, Paths by Angela Gunder 0 Comments
1 Like

Born in the sweet spot between Gen X’ers and Millenials, I never saw myself as part of either generational group.  Sure, I saw characteristics of myself and my peers in both, but neither were a correct fit for my abilities and proclivities.  So when Social Media Week wrote about the folks born in the late 70’s and early 80’s as a separate subset called the “Oregon Trail Generation,” I finally felt like I’d been classified correctly.  My formative years in computer science classes were scaffolded with challenges and rewards – if you went far enough with Mavis Beacon Teaches Typing, you could spend the rest of the class period playing Math Blaster!, Word Munchers, or Where in the World is Carmen San Diego.  The cherry on the ice cream sundae, however, was always the chance to play The Oregon Trail.  Barely dipping its toe in the actual history of the Oregon Trail, the game consisted of a series of decisions that the player had to make to keep their family alive on the perilous journey from Independence, Missouri to Oregon City, Oregon in the 1800s.  Highlights of the game included fording rivers, trading for supplies, and with the click of the space bar, shooting way more animals than one might carry back to the wagon (“I couldn’t possibly haul any more buffalo back, but what the hell! Ya dead, buffalo!”)  The game was spartan yet immersive, and when I play it now (which you can still do at the Internet Archive!!!) I marvel at the usability and clarity it affords that so many modern games struggle to incorporate into their design.

A highlight of the original game, setting the names of the people in your wagon party.

When Jess Knott, Cathy Russell and I were developing a series of original games to help teach the concept of the Monomyth Online framework, we decided to look back to three in particular that had captured our hearts.  To teach folks about the people within the monomyth, Jess used Dungeons and Dragons as a theme within an activity on persona mapping.  Cathy used the Carmen San Diego games as a way to highlight methods in a game that had people catching a “thief” on the loose.  And for my game, I wanted to illustrate the many paths an online course might take with a remix on The Oregon Trail.  Unbeknownst to both Cathy and I, after we began work on our games, Pressman Toys decided to reboot several vintage video games, to include both Carmen San Diego and The Oregon Trail.  Upon playing the card game version, I was smitten – not only did it embrace the pixelated graphic and kitsch of the original, it was hard.  Really hard!  Played as a co-op game, it took three tries the first time for my hard-core gaming family and I to beat the game, and we did so with only one person still alive, all depending on a roll of the dice with the odds stacked against us.  We later played the game in Nashville at OLC Innovate, and the crew assembled weren’t paying the closest of attention to the cards – lo and behold, a member of the wagon party died of measles due to negligence alone.  This might have been the first time that the history came alive for me – the trail was treacherous and involved all participants working together to overcome obstacles.

In creating The Online Learning Trail game for our presentation, I knew that I wanted to highlight challenges and opportunities ubiquitous in the online learning environment.  More importantly, I wanted to illustrate the fact that despite our diverse roles as faculty, students, staff and administrators, that the success of the individual was in fact a group responsibility.  I began by mapping out the elements of the original card game and then created a narrative around the different challenges – supply cards became course support, calamities became conundrums, and trail cards became the course map.  If oxen died, this was tantamount to the LMS going down – you were stuck!  If you stopped in a town for supplies, this was similar to engaging a design team to help you out – renewal!  I looked at the paths that we commonly forge through courses and tried to include measures and resources that institutions sometimes fail to prioritize or pay attention to as impactful supports for students.  As a result, the game plays out with palpable feelings of “We’re getting our butts kicked!” but more importantly “We can do this if we work together!”

Want to play the game yourself?  I’ve put together all of the files that you will need to make a copy, including the instructions for assembling the game pieces.  It primarily consists of printing and cutting, but you can elaborate on the design however you see fit.  Additionally, if you want to change the narrative to a different scenario of your choosing, I’ve included instructions for how to do so below, as well as the Adobe Illustrator files that I used to make the cards.  The graphics were created using one of my favorite vector graphics sites, Flaticon.com, so you could grab illustrations from their that fit your own narrative and go from there. 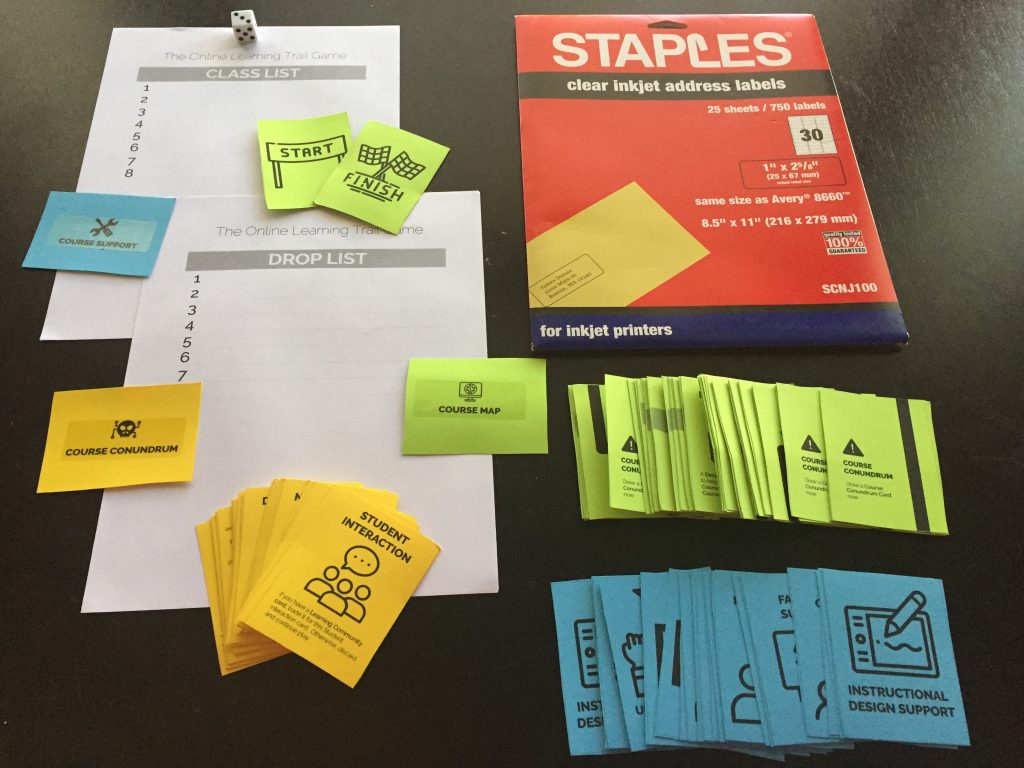 Game elements, including the package of the labels that I chose to use for the card backs.

Ultimately, the exercise of reflecting on a sacred part of my childhood was rewarding in recontextualizing the work that I do now as an instructional designer.  The beauty of the Monomyth Online Framework is that it does this in all aspects of its usage – it requires us to think about who we are, what challenges and opportunities sit in front of us, and how we can work together to address them.  My hope is that in playing this game, you’ll be able to shine a light on the path before you, and more importantly, the one your students will carve for themselves.

If you’d like to make a copy of the game, you will need to download the files below and gather a few supplies:

Additionally, if you are making this game as part of a professional development opportunity and want to connect it to the larger lesson of course mapping, you may want to print some copies of the Framework Worksheet – Unit or Module (.pdf) to give to participants to practice filling out after they’ve played the game.

If you would like to edit the actual game pieces, you can download the Adobe Illustrator files below:
Editable Game Cards (.zip)

This site uses Akismet to reduce spam. Learn how your comment data is processed.